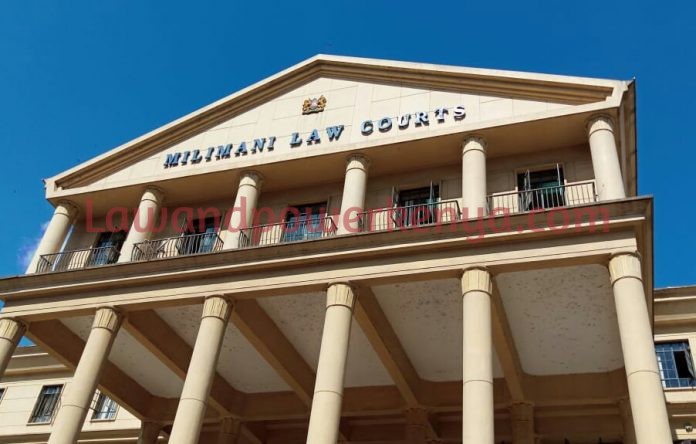 Two Embu County men handed a death sentence for killing their neighbour for allegedly stealing a sheep have lost their appeal to overturn the sentence.

Court of appeal judges, Justice David Musinga, Jamilla Mohamed and Sankale Ole Kantai dismissed the appeal on grounds that it had no merit.

The judges ruled that they were satisfied with the high court’s decision and the accused were properly convicted.

“Having reviewed the whole record, we are satisfied that the trial Judge reached the correct conclusion that the appellants were guilty of the offence of murder. They were properly convicted,” ruled the Judges.

According to the appellate judge, there was no reasonable excuse for the way the appellants acted when they set out with a common intention to go to the deceased home and attack him the way they did.  “They committed murder and there was malice aforethought,” they added.

In their appeal through lawyer Irungu Kangata, the two argued that the Embu High court Judge should have found that no proper investigation had been conducted; that the prosecution had not established its case beyond reasonable doubt, and finally, that the Judge erred in law and fact in failing to consider testimonies of the appellant in arriving at the conclusion that the appellant was guilty.

They added that the judge erred in law and fact in finding that there was sufficient evidence to support the charge of murder and the Judge should have found the evidence of three of the witnesses to be inconsistent on the encounter between the appellant and the deceased.

Kang’ata submitted that Mbuthi’s sheep had been stolen and he had made a theft report to the police, who took no action and the deceased was killed by the mob as the suspect in the theft of livestock.

They argued that evidence on weapons used was inconsistent; that there were no independent witnesses called by the prosecution; that no report of theft of a sheep had been made to police, when such a report had been made; that the evidence of the defence witness, a local chief, should have been given more weight, ” they argued.

While opposing the appeal, Senior Assistant Director of Public Prosecution Duncan Ondimu told the appellate court judges that that there was a full narration of the facts through the witnesses called on how the deceased was picked by the appellants, dragged on the ground by using a rope, beaten and finally left for dead at the market centre. Neighbour

According to the State Counsel, the appellants did not dispute in their defence that they had met the deceased. Counsel submitted that all elements of murder had been proved as there was malice aforethought.

Ondimu added that there had been an attempted cover up and that is why it took long for the two to be arrested and be initially charged at a Magistrates’ Court instead of the high Court.

He added that there was hostility by that locality and witnesses refused to come forward to record statements and there was, thirdly, attempted cover up by the police.

He urged the court to dismiss the appeal and uphold the decision to sentence the two to death sentence for the murder of Kiara.

Kiara died after he was attacked by men who were armed with rungus and sticks who unleashed terror on him using the said weapons.
This was in full glare of his family who witnessed the incident.