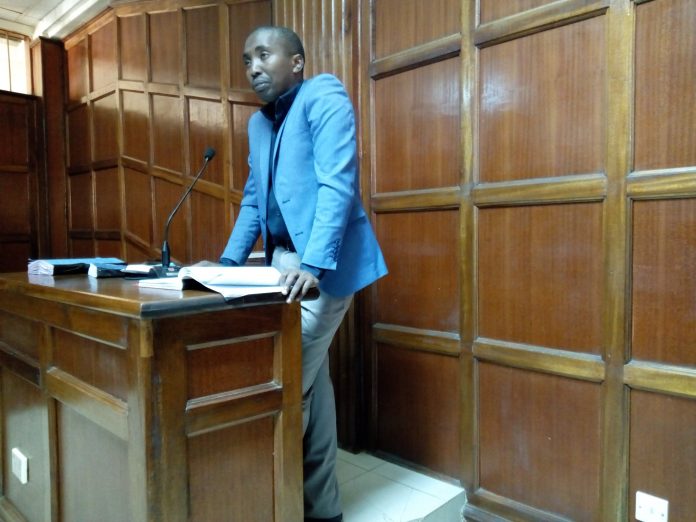 Francis Wambugu Muriithi, who lost Embakasi East parliamentary seat to Paul Ogili alias Babu Owino has been put to task to show cause why he alleges that the election was marred with irregularities.

While giving his testimony before Justice Joseph Sergon, Muriithi told the court that MP Paul Ogili alias Babu Owino was moving from one polling station to another in Embakasi Social hall polling center disrupting the exercise.
Muriithi who is represented by lawyer Ham Lagat also told the court that Babu declared himself the winner of the election even before the results were tallied.
The petitioner accused the MP of causing violence and hiring goons to disrupt the voting exercise.
“In a Soweto polling center, the MP is alleged to have gotten into a fight with one of the candidates who ended up in a comma,” he said.
However,  according to a medical document presented before court, the victim alleged to have been assaulted by Babu had a cerebral condition that made him get seizure attacks and was even put on anti seizure medication after discharge.
Muriithi was the first runners up with a bit over 43, 000 on a jubilee ticket while his opponent Babu Owin who won the seat garnered more than 46, 000 votes on an ODM ticket.
Muriithi however confirmed to the court that the Returning Officer announced the results as per the forms and not the results displayed in the public portal where he had purported that Babu’s results had been altered.
Amid claims that Babu bribed voters and had votes top up in various polling stations, Muriithi did not deny that he too was a beneficiary of votes top up in some poling stations.
He further told the court that unlike Babu who gave voters money on the voting day, he (Muriithi) only treated voters by supplying them food stuff days to the voting day and that does not to be bribery.
Previously, Muriithi wanted the petition conceded on grounds that Babu Owino’s response was filed out of time.
However, the judge ruled that he was convinced that the respondent had given sufficient reasons as to why they did not respond as per the rule.
The judge added that due to the issues raised in the petition, if the orders are granted then Babu would then it would not be in the public interest and he would not be given a fair hearing.
The MP had told the court that he failed to respond in time because he did not see the newspaper advertisement of the petition as he was out of town.
The hearing continues Wednesday.