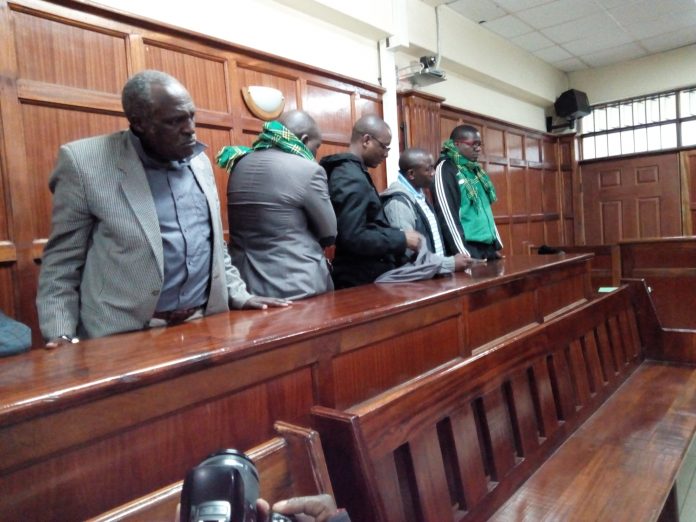 Four Nairobi City County Government employees and a treasurer of 2NK Sacco have been charged with  conspiracy to defraud Nairobi County government Sh 2.2 million.
The five, Anthony Omewo Oloo,Paul Omondi Wanga, Edwin Omondi Odera, Josephat Nyachongi Abuga and Peterson Muriuki Kigotho are accused of intending to defraud the money paid for issuance of seasonal parking tickets for Public Service vehicles belonging to 2NK Sacco.
The accused are alleged to have committed the offense on 7th November this year in Nairobi, jointly with others not before court.
The accused are alleged to have committed the offense by falsely pretending that the said money had been paid into the city revenue account held at Cooperative Bank, City hall way branch for issuance of 609 seasonal parking tickets for Public Service Vehicles managed by 2NK Sacco.
The five, city county cashier, Deputy Director of parking, county auditor, Deputy head of revenue and the 2NK treasurer also faced another charge of fraudulent accounting.
They are accused that on same date at the Nairobi City County main  cash office, falsified cashiers transactions cash records belonging to Nairobi County Government purporting it to show that on the said date 2.2 million shillings had been paid into the City County Government Revenue account for issuance of the parking tickets.
The accused are said to have again committed this offense jointly with others not before court.
They all denied the charges before Nairobi Milimani Law courts Chief Magistrate Francis Andayi.
Through their lawyer, the five requested the court to release them on lenient bond terms on grounds the auditor is  student at Kenyatta University and the deputy head of revenue has an ailing mother who is depending on him.
They were granted a bond  Sh 200,000 or an alternative cash bail of Sh 50,000.
The case will be mentioned on 4th December and will be heard on 23rd January 2017.