While giving his testimony before Justice Joseph Sergon, Samuel Ayub Mwangi said that when Obiende got into Soweto social hall, he found Babu and whispered something to him after which one of the men standing beside the MP pushed him and he fell on the ground thereby injuring his forehead.

“After Obiende fell down, other people started attacking him while still on the ground,” said Mwangi. 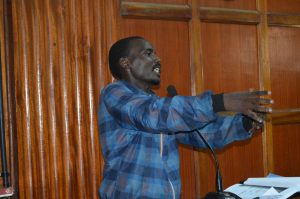 He further told the court that the signature of the jubilee agent in the Form 35A was not his adding that Form 35A and Form 35B had different results.

The Agent added that ballot materials were missing from several streams and were later brought at around 11.am in a private vehicle. This delayed the voting process for voters of the said streams.

“Coming into the hall and find your stream is not working is heartbreaking, this, therefore, made some of the voters who had been queuing from 3 am to leave,” Mwangi added.

While being cross-examined by Babu’s Lawyer Jackson Awele, Mwangi also failed to explain his allegations that the MP indeed caused chaos at the polling center during the confrontation with Obiende.

Muriithi’s agent appears in the video

Surprisingly to the court and the witness, Mwangi was part of the crowd that appeared in the video clip right behind Obiende, yet he had told the court that at that time he was inside the hall manning a stream inside the hall.

Mwangi could not explain why the crowd seen in the video played in court showing Obiende shouting and lashing bribery allegations against Babu appeared calm yet he had told the court that the Police were shooting in the air because there was chaos at that moment.

So far, five witnesses have testified in the petition filed by Jubilee’s candidate Francis Muriithi seeking to nullify the election of Babu Owino on grounds that the election was marred by violence and irregularities.