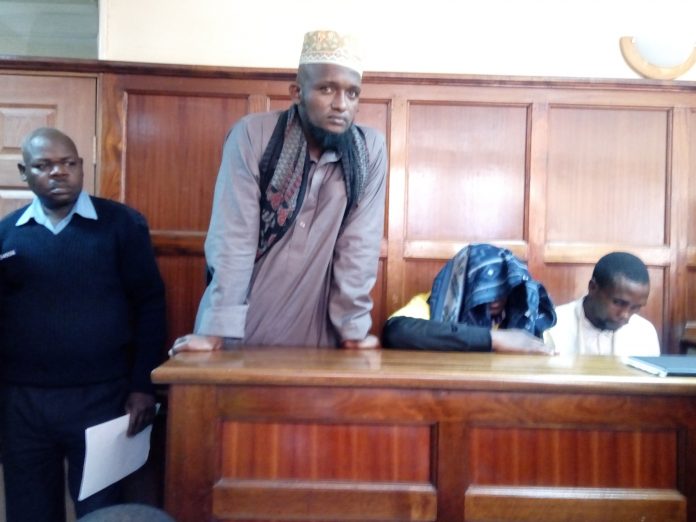 A sheikh alleged to be an Al-Shabaab member will stay in custody for five days pending the courts ruling on his release on bond.

Guyo Gorsa Boru was on 20th February charged that on or before 13th January 2018 at Madrassa To a within Marsabit County, he was found being a member of a terrorist group namely Al-Shabaab.
Guyo was also charges with collection of information. According to the charge sheet, on 13th 13th January at the same place, the accused was found in possession of an X-TIGI mobile phone with a micro SD card containing 8 videos for use in commission of a terrorist act.
The Sheikh was further charged with eight counts of being in possession of articles connected with commission of a terrorist act.
Guyo denied the charges before Chief Magistrate Francis Andayi.

The prosecution objected to the release of the accuses person on bond even after detaining him for 30 days.
The court heard that motor vehicle KBM 200D which was impounded was fitted with explosives and was headed to launch an attack at the Milimani Law Courts Chief Magistrate’s court on 16th February 2018.
This is the day the accused was scheduled to appear before the same court for purposes of pleading to the charges and the attack was meant to illegally free the suspect from lawful custody.
However, his lawyers Chacha Mwita and David Ayuo objected to the further detention of their client saying the prosecution had failed to give sufficient reasons to warrant denial of bond.
The two further told the court that their client is entitled to bail as per the constitution.
The lawyers also argued that the Sheikh has a fixed place of aboard in Kenya and therefore not a flight risk.
The magistrate will deliver the ruling on his release on bond on 26th February.