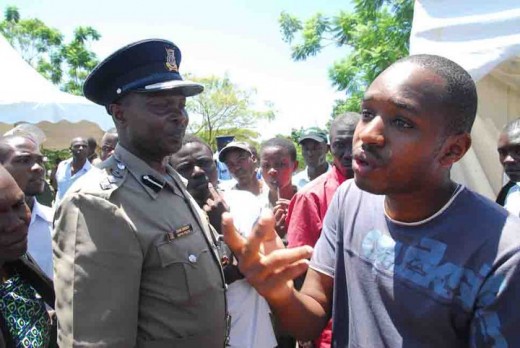 Court has declared that the rights of human rights activist Boniface Mwangi were violated by Kilimani OCPD when he prevented him from demonstrating at state house to deliver a petition to the president about a year ago.

While delivering the judgment on behalf of Judge Isaac Lenaola, Judge Chacha Mwita said that powers to bar the March, assemble or present a petition to state house are only vested to the OCS.

“Stopping the activist from matching to the statehouse without good reason was a violation of his right,” said Chacha.

However, the judge said that demonstrating at the statehouse is legally limited in the constitution hence the reason he directed Mwangi to express the grievances to the president at his Harambee’s House Nairobi Office in Nairobi.

Mwangi moved to court in the year 2015 seeking orders restraining the Inspector General of police Joseph Boinett from stopping demonstrations that were planned December 9, 2015.

He was also seeking to be allowed to present a petition to President Uhuru Kenyatta regarding the state of corruption in the country on the same day at the state house gate A together with his team during the UN International day.

In the petition, Mwangi stated that on December 3, 2015, he delivered a written notice to the officers at Central Police station and Kilimani Police station notifying them of his intention to hold an assembly at freedom corner in Nairobi and statehouse.

He said that his application was denied by the Kenya Police Without any reason.

He contested that Kilimani Police Division refused to allow him and a group from demonstrating to State House Gate A.

Mwangi contested that the right to freedom of peaceful assembly comprises the right to choose the venue, time and purposes of assembly.