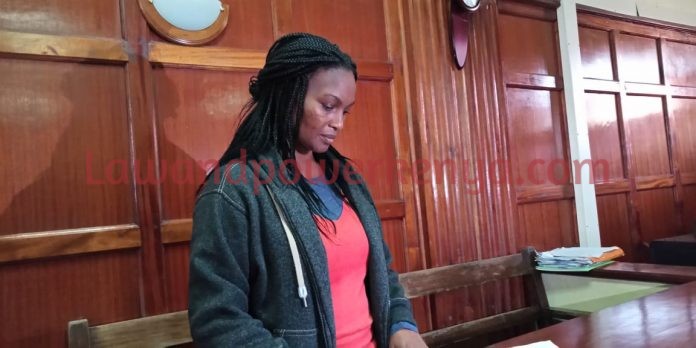 The Director of Public Prosecution wants suspect in the murder of Tob Cohen, Sarah Wairimu Kamotho and her lawyers to held in contempt of court.

This, the court heard, is due to the fact that they addressed members of the public during the burial of Cohen on matters evidence which was against the court order issued barely two weeks ago.

The court further heard Wairimu allegedly threatened her “co-conspirators” when she given time to speak during the send off.

The prosecution intends to furnish the court with the video clips that allegedly captured her making the utterances.

“All parties were present when the order was issued that they should not address the media,” said Senior Assistant director of public Prosecution Catherine Mwaniki.

Lawyer Cliff Ombeta for the family of the late tycoon also submitted that Wairimu’s lawyer Philip Murgor should be disqualified from the case since he is appointed to the office of the DPP and was gazetted in January 2019.

Ombeta added that he did not find other gazette notice to show revocation of the notice that he is a prosecutor.

However Murgor responded saying that issue of contempt are very serious and can only be brought by way of formal application.

He accused the prosecutor of giving false information to the court with the intention of diverting the attention from the purpose of today’s appearance which is taking plea.

“Those who spoke are the brother to Tob, ambassador, priest, the widow then two politicians. No one discussed evidence,” said Murgor.

Murgor told the court that since charging the accused person, the prosecution has not provided a shred of evidence in the case.

“It is a figment of her own imagination that any lines were crossed,” he added.

Murgor went ahead to term Ombeta’s claims as side shows.

He admitted to having been recently appointed in the said office. He however, tendered his resignation after two months.

“I resigned on 7th March 2019 via a letter where I gave reasons to Noordin Haji (DPP) why it was impossible to work for him.

Murgor further said that Ombeta should have filed a formal application challenging his capacity to appear in the matter as defense counsel so that he can respond through affidavit.

He added that he has visited the office of the DPP as a defense lawyer several times, recently in the Kimwerer dam case.

“Neither issue should affect the issue of taking plea or bail application,” he said.

In addition, Murgor toldbthe court that it is the Directorate of Criminal Investigations George Kinoti who is in contempt because of the interview he gave a Dutch newspaper which he produced in court.

He told the court that Kinoti loves publicity.

Murgor had a copy of the article where he quoted DCI saying….. “she had applied for bail to fight for property.

He said the DCI has no control of his mouth, he can not obey court orders, added Murgor.

He also accused one state counsel by the name JD Otieno of being in contempt after published an article on social media on inheritance of a murdered person.

Prosecutor Mwaniki asked the cpurt to allow her to file a formal application on the issue of contempt.

She also requested for time to confirm the said gazette appointing him as a Public Prosecutor was revoked.

The court heard that this position must be clarified before Wairimu takes plea because it is a serious issue.

Justice Stella Mutuku will deliver her ruling on the raised issues on 1st October.

“I need time to write a ruling, it can not be done on the spot. I defer plea for now. The accused will be remanded until 1st October,’ the judge said.