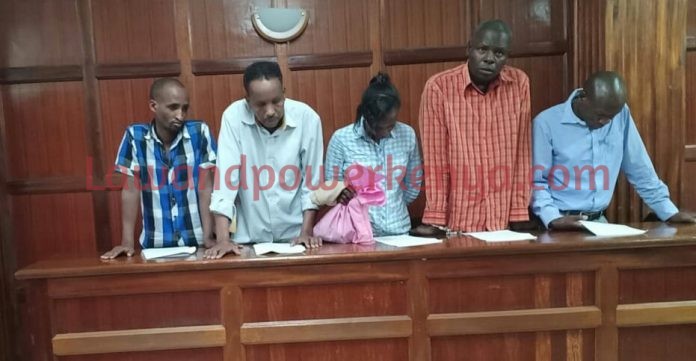 A Nairobi court has detained four men and a woman for 30 days in connection with the recent terror attack in a Nairobi Hotel.

Senior Principal Magistrate Martha Mutuku issued the order to have the five detained to allow police to complete investigations.

According to the police, suspects were arrested due to their possible involvement in aiding and abetting the terror attack that took place on 15th and 16th January at the Dusit hotel complex at Riverside, Nairobi.

The investigators believe the suspects have other associates who are yet to be apprehended and the the arrests are being vigorously pursued by security agents both in and out of the country.

According to an affidavit by an ATPU Inspector, the assailants were driving a motor vehicle KCN 340E at the time they commenced the attack by shooting sporadically.
“Upon searching the said vehicle, police recovered a mobile phone make Tecno Macron with a safaricom line, a Nokia phone without a line and an extremely damaged laptop make HP litbook black on colour.
Investigations have revealed that the ID used to register the said safaricom line has also been used to register 11 other lines.
The court heard that the police have received reports that some of the attackers resided in a house in Mucatha in Ruaka. These are Ali Salim Gichunge alias Foruk and Violet Kemunto Omuoyo.
It was also established that Gichunge had three mobile phone numbers while Kemunto has six registered phone numbers and the team of investigators are currently in the process of obtaining call data records for the above numbers and carrying out analysis of the same.
Wainaina is believed to be a taxi driver and was arrested late on 16th around MP Shah hospital. Muthee was arrested on 17th.
The court heard that Gladys who is an mpesa agent was arrested on 16th in Maua, Meru County.
The fourth suspect, Abdihakim who is a Canadian national was arrested in Suncity area in Nairobi.
Ibrahim was also arrested on 17th at Two Rivers Mall in Kiambu County.
It is alleged that on the day of the attack, Wainaina was driving the vehicle KBR 243D and he did drive to the scene with one of the attackers who was killed.
The attack left many dead and others injured including foreigners.