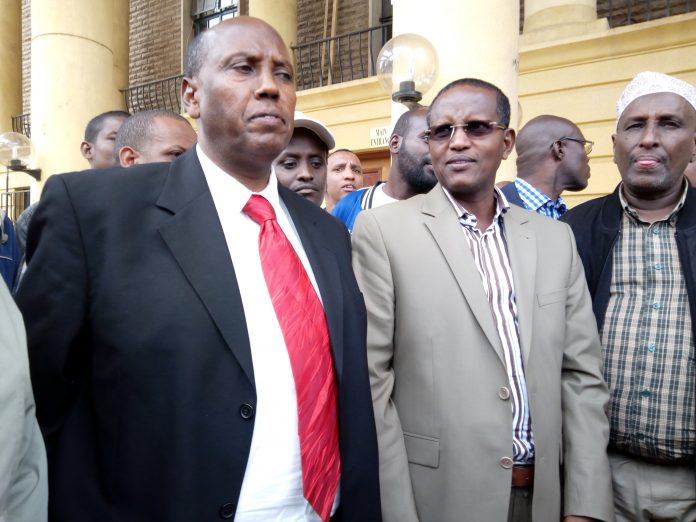 The petitioner in the matter challenging the election of Mandera County governor Ali Roba has told the court that the gubernatorial elections in Mandera were marred with massive irregularities including physical violence.

During re-examination, the former Devolution ministry administrator Hassan Noor told Justice Fred Ochieng that there was actual violence which saw the buttocks of one of his agents cut.

“EFP agents were being assaulted and chased away in the presence of police officers,” Noor told the court.

Noor reaffirmed that 17 polling officers in Mandera North were not gazetted IEBC officers as their contracts with IEBC had no dates and no witness signatures.

The petitioner told the court that he raised complains at polling stations and tallying centers after realizing that no voting took place in some of the stations.

“Some of the voters from those polling stations went to other polling centers but some did not find their way since they were not informed about the changes,” said Noor.

He added that despite there not being any voting exercise in some of the polling stations, there were results from those stations.

The petitioner also told the court that some of the electronic equipment was abandoned and the procedure for abandoning them was not followed.

“There is a form to be filled when there is an alternative form of voting used which is returned to the Returning officer after the exercise and the only way to know if the process was followed is to scrutinize and recount,” said Noor.

He added that some polling stations were giving voters only one ballot (for MCA) instead of six.

However, after the Noor’s re-examination, no other witness testified because the respondents had not been served with the list of witnesses to testify in the matter.

The matter was adjourned until Monday been adjourned to Monday 30th, 2017.

In the petition filed this afternoon at Milimani High Court, Hassan claims that the elections were marred by massive electoral malpractices and irregularities that substantially affected the outcome of the gubernatorial elections in specific polling stations.

Hassan further claims that the irregularities in Ashabito Ward, Guticha Ward, Morothile Ward, parts of Rhamu Ward and Rhamu-Dimtu Ward led to him being rigged out in favor of Roba.