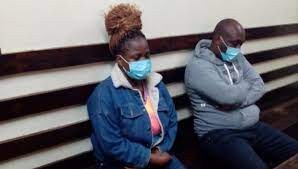 A businessman and a university student who facing rape and sexual exploitation charges have filed an application seeking to be released on bail.

Abdirizak Adan Abdullahi and Faith Washiali Bwibo were denied bail on Friday 9th by Senior Principal Magistrate Esther Boke after pleading not guilty to the charges.

The magistrate ordered that the two remain in custody until the victim testifies. She noted that the offence against the two is serious, and if granted bond, they are likely to intimidate witnesses since Abdullahi is a licensed gun holder.

Under certificate of urgency, Abdullahi and Bwibo want the high court to admit them on reasonable bail or bond terms pending the hearing and determination of their criminal case before Kibera law courts.

The two argue that Senior Principal Magistrate Esther Boke erred in her ruling when she ordered them to remain in custody until key witneses testify in the rape case.

According to the two, there were no compelling reasons that would warrant them to be denied bail.

They say that they were arrested on 1st April 2021 and detained during the Easter holiday season and only to be arraigned in court on Thursday evening last week.

They dismissed the prosecution allegation that they are a flight risk claiming that they are Kenyans and their families leave in the country.

“It would therefore be erratic for the prosecution to assert that we are a flight risk without tendering any evidence to substantiate the claims and denying us bail pending trial is in itself an act of punishment before conviction which is excessive and punitive,” claims Abdullahi and Bwibo.

The two are accused that on 2nd March 2021 at South C, Mugoya Estate in Langata Sub-county, Abdullahi intentionally and unlawfully raped the complainant whose identity has been concealed for her safety.

Abdullahi, who is facing similar complaints from four other women has an alternative charge of committing an indecent act with an adult by touching the complainant’s breasts without her consent.

He is also charged with malicious damage to property by willfully and unlawfully damaging an IPhone 8 worth Sh 40,000 belonging to the victim.

Bwibo, on the other hand, is accused that on the same date and place, she unlawfully and knowingly transported for the purpose of sexual exploitation by means of the deception, the rape victim.

Bwibo is suspected to have been luring girls to the home of a suspected serial rapist in Nairobi where they were allegedly assaulted and raped.

According to preliminary Investigations conducted by detectives, it is alleged that Bwibo invited the girls to a party in the South C Estate, only for them to be coerced into satisfying a male friend’s sexual needs.

According to investigations,  on the fateful day around 2pm, the complainant received a call from her friend Bwibo who invited her together with other friends to a party at around 4pm.

After they arrived at the agreed place, the girls said Bwibo requested an Uber for them as she had not yet arrived. However, they later met up and went to Carnivore Grounds. Bwobo is alleged to have told the girls to take her to see someone and that is how they landed at Abdullahi’s house in South C.

After the ordeal, the victim went to the hospital for treatment and reported the matter at Lang’ata police station. She told the police Abdullahi raped her after she failed to give in to his advances.

Following the police report, the two suspects were arrested. However, Abdullahi’s arrest was dramatic as he enjoyed protection from his neighbours, some of whom are senior defense forces personnel.

Several attempts to take him into custody were thwarted by the armed security officers before detectives finally got him.

The prosecutors told the court that some victims were driven to the outskirts of Naivasha town and left in the wilderness in a bid to silence them.

Abdullahi reportedly sent emissaries to convince one of the complainants to settle their case out of court.

The court heard that some of the complainants claimed that they were threatened with death if they did not fulfill Abdullahi’s wishes.