North Mugirango MP Charles Mungare Geni has had his daughter arrested and arraigned in court over terrorism charges as punishment for her eloping with her Muslim boyfriend.

Mungare’s daughter Erisiana Sabiri Mongare and her boyfriend Ahmed Salim Laali are ‘suspected’ to be planning/collecting information for the purpose of facilitating terrorism activities.

The two were arrested on May 25th 2017 at South C and Nairobi CBD along Kenyatta Avenue respectively. 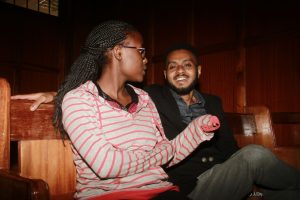 The love birds who were brought to court under a miscellaneous application seeking to detain them for 5 days to complete investigations, are alleged to be in constant communication with known elements that are wanted by the police on terrorism charges.

The police say that intelligent reports received by ATPU places the two at the top of cartels involved in recruiting and radicalization of youths to join Al-Shabaab.

The Investigating officer told Senior Principal Martha Mutuku that other accomplices are being sought by the help of the two so that they may be arrested and subsequently charged in a court of law.

The court heard that Laali whose father is a retired KQ senor official  had secured a room at HEELA HOTEL in South C where he has been staying with the second respondent since May 18th until yesterday when they were arrested.

The police further said that the two were planning to travel to Tanzania before the end of this month hence they had obtained temporary movement passes from the immigration department and their sources of funds are not yet established.

The police have submitted their mobile phones to ATPU ICT lab for analysis and that the investigation officer needs to contact Safaricom service provider in order to obtain call data records.

Their lawyer Hassan Nadwa objected the prayer sought on grounds that the application is an abuse of court process and should be barred in law as it is based on mere speculation.

Nadwa told the court that the issue was a case of two youths aged 24 and 22 years respectively who have cleared university and who opted to cohabit without the blessings of their parent hence the girls father brought forth the allegations before court.

“Mongare’s father moved to ATPU to instill discipline in the daughter and the son in law as he could not believe that she had fallen in love with the guy,” the lawyer said.

He added that Mongare and Lali are two people who are in love and the investigating officer has concealed the relevant facts in that they received intelligence report but there is no evidence to that effect.

Nadwa further told the court that the investigating officer interrogated the boy’s father and it was noted that the money that was used by the two to have their ‘honeymoon’ was obtained from his father.

He therefore prayed that the court to dismisses the application as it is an abuse of court process.

The magistrate ruled that the two be detained till Monday at Muthaiga Police station and also ordered the Investigating Officer to issue summons to the respective parents to appear in court on Monday to shed light on the matter.