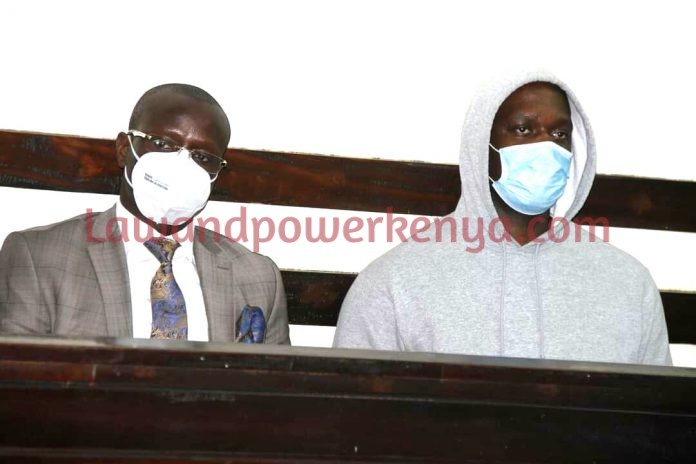 Police have moved to seeking orders to detain two men suspected to be involved in the murder of  suspected gold con for a further 14 days to complete investigations.

The two were arrested on 22nd August 2020 following a report of a shooting incident at Galana suites in Kilimani area, Nairobi on 21st August 2020, where the deceased lived.

The deceased, 28 year old Kevin Ombati Omwenga (pictured) is suspected to have been shot by his friend Bodo after a successful gold scam deal went sideways when it came to splitting the money.

According to police, the deceased was with Bodo at his place for dinner after a day together at Kilimani area.

“The deceased was together with other people who were his relatives in the house when the first respondent (Bodo) requested to go home after dinner and the deceased stood up from his seat and went to the bedroom with him for a talk,” said Sergeant Boya.

The court heard that after some minutes, a sound similar to that of a gunshot was heard from the bedroom of the deceased and Bodo came out of the room hurriedly saying he wanted to rush somewhere but was restrained by the brother to the deceased while the others went to the bedroom to see what had transpired only to find Omwenga lying in a pool of blood.

“The deceased was rushed to Nairobi Women’s hospital where he was pronounced dead on arrival,” the court heard.

The investigator further told the court that Bodo went to Glo-jet offices situated at Senteu Plaza, Kilimani, where he hid the gun used in the commission of the  offence.

After the death, the group, Bodo included, went and reported the matter at Kilimani Police station and investigations commenced immediately leading to Bodo’s arrest. He accompanied police to the office where the firearm was found.

Boya told the court that releasing the two suspects would interfere with investigations, adding that they are yet to take their fingerprints, DNA sampling, mental assessment, taking the firearm to a ballistic expert, obtain records of the murder weapon, obtain CCTV footage showing movement of the vehicle used by Bodo and the deceased among others issues.

The said firearm allegedly belongs to Chris Obure and is still a mystery how Bodo got hold of it.

Omwenga had allegedly been working as a car dealer for about four years before quitting his job  all of a sudden and changing his lifestyle.

He apparently moved into a Sh 150,000 monthly rent house and bought a Sh 14 million car.

The court will deliver its ruling on the application on 25th August.