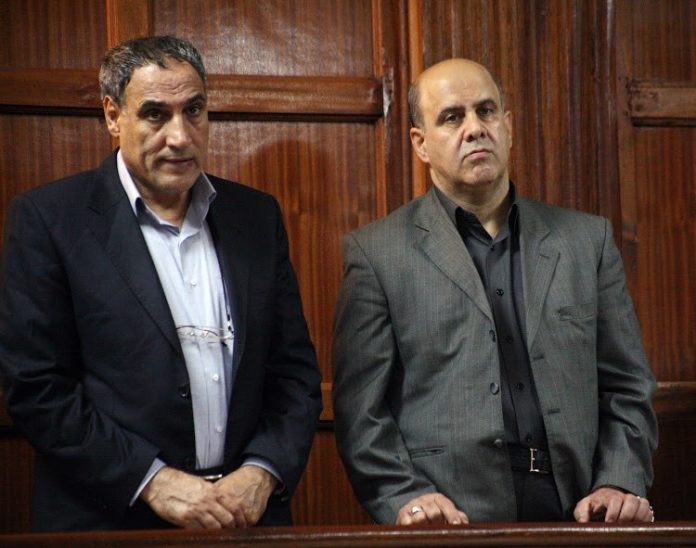 Two jailed Iranian jailed for life in Kenya after being found guilty of terrorism have yet again failed to convince the high court to review their sentence after losing at the Supreme court.

Ahmed Abolfathi Mohammed and Sayed Mansour Mousavi were found guilty of possessing 15 kilograms of lethal explosive identified as RDX nine years ago in Mombasa and were sentenced to life imprisonment by the trial court.

The sentence was however, reduced to 15 years after a successful appeal at the High Court. They were later acquitted at the appellate court but the DPP appealed the matter at the Supreme Court where their acquittal was reversed and the 15 year sentence upheld in March 2019. The duo had allegedly come to Kenya for a 10 day holiday.

Justice L Mutende dismissed the application by Ebrahim and Gholi seeking resentencing for lack of jurisdiction.

“The upshot of the above is that this court, being functus officio , is not seized of the jurisdiction to determine the matter. In the result, the application fails and is dismissed,” ruled Justice Mutende.

Functus officio doctrine is one of the mechanisms by which the law gives expression to the principle of finality.

The judge ruled that according to this doctrine, a person who is vested with adjudicative or decision-making powers may, as a general rule, exercise those powers only once in relation to the same matter. The principle]is that once such a decision has been given, it is (subject to any right of appeal to a superior body or functionary) final and conclusive. Such a decision cannot be revoked or varied by the decision-maker.

This is because the two convicts had already appealed at the High Court, then the court of Appeal and finally the highest court in land, The Supreme court. After losing at the Supreme court, they went back to the high court.

The two approached the Constitutional and Human Rights Division seeking re-sentencing in line with the provisions of section 333(2) of the Criminal Procedure Code (CPC), a matter that was transferred to this court due to the nature of the application.
ALSO READ:DPP-wants-three-men-detained-to-investigate-planned-escape-of-suspected-iranian-terrorist-currently-in-custody

In their submissions, the two urged the court to consider re-sentencing them even after acknowledging the fact of this matter had been adjudicated up to the apex court in the land which upheld the conviction and sentence.

Their main contention was that it must have been an oversight on the part of the learned Judge of the High Court to have stated that he had considered the period that the applicants were in remand custody from 16th June 2012 before they were convicted but went ahead to order that the sentence would take effect from the date that the applicants were convicted by the trial court on the 6th May 2013, a fact that was not faulted by the Supreme Court.

The state, through Senior Assistant Director of Public Prosecution Duncan Ondimu, argued that the court lacks jurisdiction to determine this matter adding that the issue of section 333(2) has been exhausted in all the appellate courts as it was dealt with in the High court and the same issue arose in the Supreme Court as well and in that breath “this court cannot purport to reopen or examine the decision by the last court at the apex”.

Ondimu argued that Articles 165(3) provides that jurisdiction to determine the question whether a right or fundamental freedom in the Bill of Rights has been denied, violated, infringed or threatened or jurisdiction to hear an appeal from a decision of a tribunal appointed under this Constitution to consider the removal of a person from office, other than a tribunal appointed under Article 144.

The Supreme court ruled that the two would serve the remainder of their imprisonment term after which they shall be repatriated to their country.

“The judgment and orders of the Court of Appeal made on 28th January 2018 are hereby set aside and The conviction by the trial court of the respondents and the High Court decision are hereby affirmed,” ruled the supreme court.

Four of the judges found that evidence produced showed that the two planted a 15 kg explosive at a Mombasa golf course and failed to give evidence on their business in Kenya.

The top court agreed with DPP that the two had an explosive after one of them admitted the on the same and this made the court to find that the two were indeed guilty.

However, two of the judges dissented to the decision of the majority judges saying the evidence against the two was not watertight.

The two judges said the evidence was purely circumstantial which could not have been used to prove the case beyond reasonable doubt.