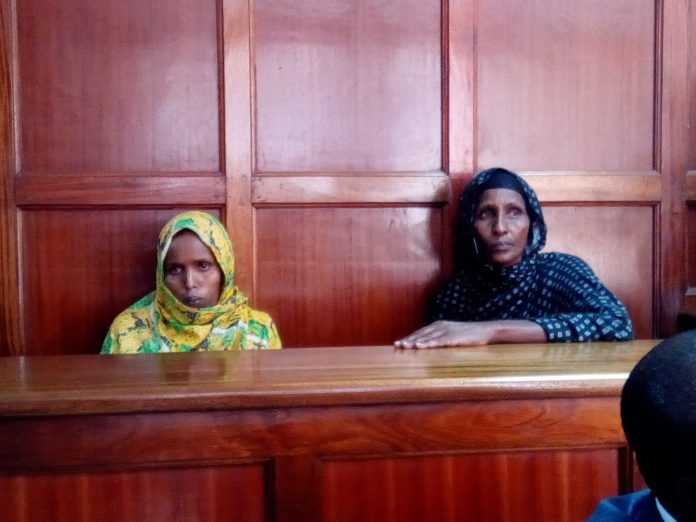 Two women from Wajir County have been charged with being in possession of ammunition and an AK47 without a license.

Halima Sheikh Abdullahi and her co-wife Nurea Adhan Jimale were charged with being found with in possession of 80 rounds of ammunition and the firearm in their home in Bula Elmi, Wajir East sub County.
The two are alleged to have committed the offenses on 24th January 2018 jointly with others not before court.
The two pleaded not guilty to the charges before Resident Magistrate Hellen Onkwani.
The Director of Public Prosecution told the court not to grant the accused persons bond as the investigations were ongoing.
In a sworn affidavit, the investigating officer told the court before their arrest, police had received information that their husband, one Ibrahim Gedi Abdille was in possession of a firearm and was suspected to be an Al-Shabaab operative in Wajir.
The court heard that on the material day, police raided their home and the husband managed to escape leaving in the house his two wives.
The police said they were still in pursuit of Gedi who is believed to have crossed over to Somalia since they live near the border, to avoid arrest.
When the police searched their house, they recovered an AK47 loaded with 80 rounds of ammunition.
The court was told that if the wives were released, they were likely to interfere with the investigations making it hard to arrest the husband.
Their lawyers Danson Omari and Abdirahman Abdullahi objected the DPP request to deny their clients bond saying the police have had enough time to conduct the investigations.
The court had that the accused person had been in custody for a week since they arrested.
The accused persons we’re said to have been presented before a Wajir court and then detained for a week before being brought to Nairobi.
Omari told the court that a criminal offense is a personal thing and therefore should not be blamed for what their husband is suspected to have done.
They added that the two wives were not likely to abscond just because they live near the Somali border.
The court will rule whether to release the two on bond on 6th February.