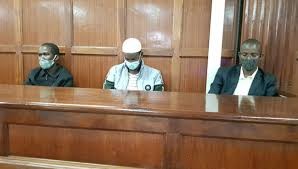 The Westgate Terror attack suspects have been sentenced to 33 years and 18 years in prison.

Chief Magistrate Francis Andayi found Mohamed Ahmed Abdi and Hussein Hassan Mustafah guilty of terror offences including conspiracy to commit terrorism by assisting Somalia based Al-Shabab. The Magistrate however acquitted the third suspect, Liban Omar who is alleged to have been abducted by security agents moments after his release.

However, since the time the accused persons have spent in prison as the trial continued will be deducted from the sentence, the two will serve 26 and 11 years respectively.

While delivering the sentence, the  magistrate said he considered all submissions in the case including the accused persons mitigation where they maintained their innocence and the fact that the pre-sentencing report notes the two are of good character and behaved well during the trial.

“Unfortunately, the issue of innocence is not in this case as the court has already convicted them,” the magistrate stated.

Abdi and Mustafah were found guilty of  conspiracy to commit a terrorist act and the second count of knowingly giving support to terrorist activities and were sentenced to 18 years each for each count. However the magistrate ruled that the two sentences will run consecutively.

Abdi was also found guilty of the offence of being in possession of material used in promoting terrorism and was sentenced to 15 years in prison making his sentence total to 33 years.

Andayi said Abdi and Mustafah’s participation may be considered subtle “but the end result is devastating.”

The close to four days attack in 2013 left 67 people dead and score injured.