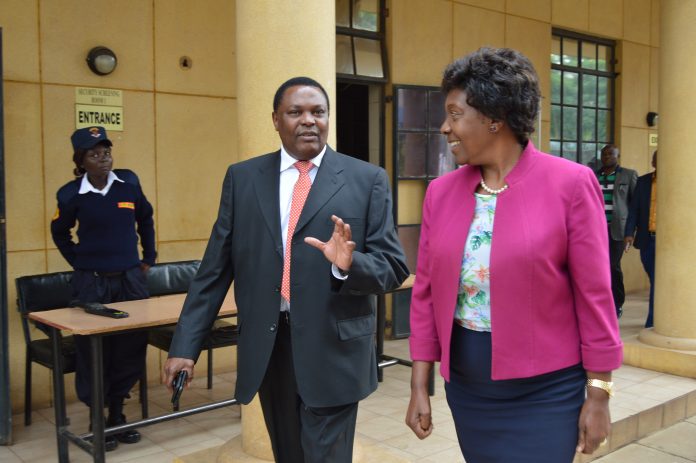 Former Kitui Governor Julius Malombe’s Chief agent Bernard kitheka today testified that wiper Democratic Party had agents in all polling stations.
Kitheka who double as Malombe’s political and economic advisor further testified that he personally never hat any trading but affirmed that the agents did go through training.
During examination in chief by Malombe’s lawyer Apollo Muinde, the Chief agent told Justice Pauline Nyamweya that he has worked in The County Government of Kitui for the last four years.
During cross examination by the IEBC lawyer, Kitheka failed to explain why done of the agents had similar National Identification numbers.
The court also heard that one of the wiper agents has signed for jubilee in one of the forms.

On Thursday, two witnesses narrated before court how they werw attacked by goons during election day.
Florence Mbuvi told the court that the goons attacked her over claims that she was bribing voters on behalf of former Kitui Governor Julius Malombe.
Ms Mbuvi told Justice Nyamweya that she had dropped a voter at Muslim Secondary school polling station when she was attacked by more than 10 men.
“They robbed me Sh20,000 claiming that I was using the money to bribe voters,” said Mbuvi.
The witness said that she reported the matter to Kitui police station and identified the main attacker as one Moses Munyalo.
However, since she reported the matter in August last year, no arrest has been made nor anyone charged with assault.
Another witness Benson Munyao told the court that he was an agent appointed by Wiper party to be in charge of a station at Kitui Boys High School but refused to sign Form 37A because he did not agree with the results.
He said all was well at the station since the station was opened at 6am until about 8.30am when he spotted a vehicle outside the polling centre bearing Ngilu’s campaign posters and T-shirts.
He said he informed police officers manning the station and the vehicle was towed to the police station despite Ngilu’s protestations.
The court, however, rejected the production of photos he had allegedly taken on the fateful day, because he did not comply with provisions of the evidence Act.
Justice Nyamweya upheld Mr Kilukumi’s objection stating that the witness should have filed a certificate to show the person who took the photos as per the evidence Act.
The court heard that it is against election Act to have posters or campaign material in a polling station on election day.
Munyao further told the court when he went to the police station to enquire about the vehicle in September last year, he was told to go to the office of the Directorate of Criminal investigations.
Upon getting to the CID, he said he was informed that the vehicle had been released to Ngilu’s Chief agent.
He told the court that the governors supporters were chasing away Malombe’s supporters from polling stations, even the agents.
Former governor wants Ngilu’s win nullified on grounds that it was marred by massive irregularities.
He claims that there was intimidation, violence and bribery of voters on the election day.