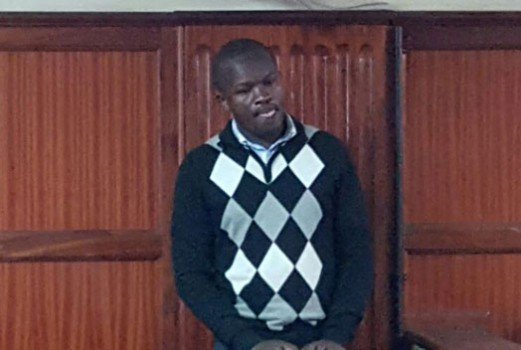 A businessman who killed his lawyer wife at their Buruburu home has been sentenced to 20 years in prison.

Justice Stella Mutuku found Erastus Ngura Odhiambo alias Ediot guilty of murdering his wife, Linda Wanjiku through a single gun shot.
“Having considered the mitigation by the accused person and the victim impact statement by the family of the deceased, I sentence you to serve 20 years imprisonment,” the judge ruled.
During the sentencing, the judge said that the family will live with the pain of losing their daughter/sister no matter the sentence passed.
Ediot was charged with murdering his wife the morning of 12th December 2013 after a quarrel which turned violent.
It is alleged that on the fateful day, Shiko, as popularly known by her friends and colleagues had gone out drinking with friends before returning home to meet her death.
Ediot who is an IT expert is alleged to have kept calling Shiku’s phone the whole night to go home even thought he was out drinking himself at a local joint.
He got home later that night and upon inquiring from Shiku’s  younger sister who was left baby sitting their then one year old baby, informed him that she was not yet home.
Upon hearing that, the accused is alleged to have gotten back into his car and left.
The court heard that when the accused got back home at around 3 am, his late wife was also arriving and that is when he the war began.
When Shiku’s sister went to help her out, they both overpowered the accused and pushed him to the ground As they attempted to escape, the court heard that was when a gunshot was fired by Ediot and hit the deceased.
However, the judge said that the accused could still have acted differently no matter the situation.
In his mitigation, Ediot had urged the court to be lenient while passing his sentence after being found guilty of murder.
He told the court that there is no single day he ever absconded and was remorseful of what transpired on morning December 12th 2014.
“I urge the court to give me a sentence that would correct me rather than punish me,” said Ediot.
He said that every human being needs a second chance and requested the court to exercise its discretion while passing the sentence.
He informed the court that his first wife is jobless and has left behind several children who depend on him.
The prosecution told the court that the deceased was a 27 year old lady, a mother of one and was full of potential.
“The court has to consider that the accused person blocked the deceased family from rushing her to hospital  after shooting  her,” the prosecution added.
They urged the court to consider that the child lost love of the mother, and was deprived of the most important person in his life by the acts of the accused person.
“The family of the deceased has not yet recovered from the trauma resulting from how their kin met her death,” the court heard.
The court was urged to dismiss the sentiments by the accused person that he has been obedient saying such actions do not amount to being remorseful.
On the victims impact statement, the family said that their daughter’s life was cut short by the hands of someone she once trusted.