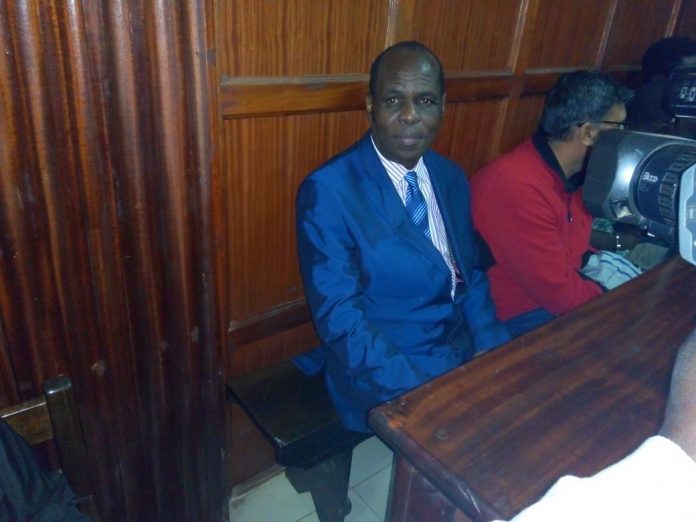 Controversial Bishop Gilbert Juma Deya has been charged with five counts of child stealing in a Nairobi court after being arrested today in the wee hours of the morning.

The self proclaimed Archbishop who is famous for ‘giving childless people miracle babies’ is alleged to have stolen the children all below the age of 14 years from mountain view estate in Nairobi on diverse dates between May 20th 2002 and August 19th 2004.

The Bishop who is charged together with others not before court appeared before Milimani Courts Chief Magistrate Francis Andayi and denied the charges.

The accused who leads a congregation of 36,000 people in the UK has been living there and arrested at 4 am today at Jomo Kenyatta International Airport when he alighted.

According to an affidavit sworn by the officer attached to the matter, the charges against Deya were preferred in 2005 which he was alleged to have committed between the year 1999 and 2004.

The prosecution team lead by Nicholas Mutuku objected to the accused person release on bond terming at flight risk.

According to the affidavit, immediately after the commission of the said offences, the bishop fled to the UK where he has been residing for over 12 years.

Deya was in 2005 issued warrants of arrest after the charges were preferred against him.

Upon issuance of the warrant, the Republic of Kenya made a request to the UK for the extradition of Deya from the UK to Kenya to face the said charges.

According to the affidavit, the controversial bishop strenuously fought the extradition proceedings in the UK, but the UK courts dismissed all his objections and directed that he extradited in 2007.

His lawyers John Swaka and Cliff Ombeta asked the court to release their client on bond on grounds that he is not at flight risk.

Swaka told the court that after his client was picked up by policeat JKIA, he was taken to the CID Headquarters where his fingerprints and other details were taken.

Mr. suaka told the court that Deya is actually willing to go for a DNA test adding that his client has no desire to interfere with the investigations.

The court was told that Deya being a spiritual father to many, some of them including Apostle James Maina Ng’ang’a of Neno Evangelism center and Apostle Musili are willing to voge for him that he shall attend court.

The magistrate will make the ruling on whether to release Deya on bond on 10th August.In the meantime he will be remanded at Kamiti Maximum Prison.