A businessman has been charged with conspiracy to defraud Africa Banking Corporation (ABC Bank) Sh 60 million.

Ali Noor Abdi is accused of conspiring with another before court to defraud ABC Bank of a fixed deposit debenture of Sh 60 million which was registered at the Companies Registries.

Abdi is alleged to have committed the offence on diverse dates between 1st July 2014 and 7th April 2020 in Nairobi.

The accused is also charged with forging a company search form CR 12 number 141780 in the name of Allied East Africa Limited purporting it to be a genuine search form prepared and signed by Nicholas Oduor Oduol, a former registrar at the Companies Registry.

Abdi is alleged to have committed the offence on or before 4th July 2017 at an unknown place within the Republic of Kenya jointly with another, with intent to defraud ABC Bank.

He is also accused of committing a similar offense on or before 10th October 2017.

The accused denied the charges before Chief Magistrate Wendy Kagendo. He was granted a bond of Sh 1 million with one surety of a similar amount. Alternatively, he was given a cash bail of S 500,000 with one contact person.

The case will be mentioned on 6th October for pre-trial. 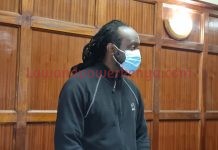