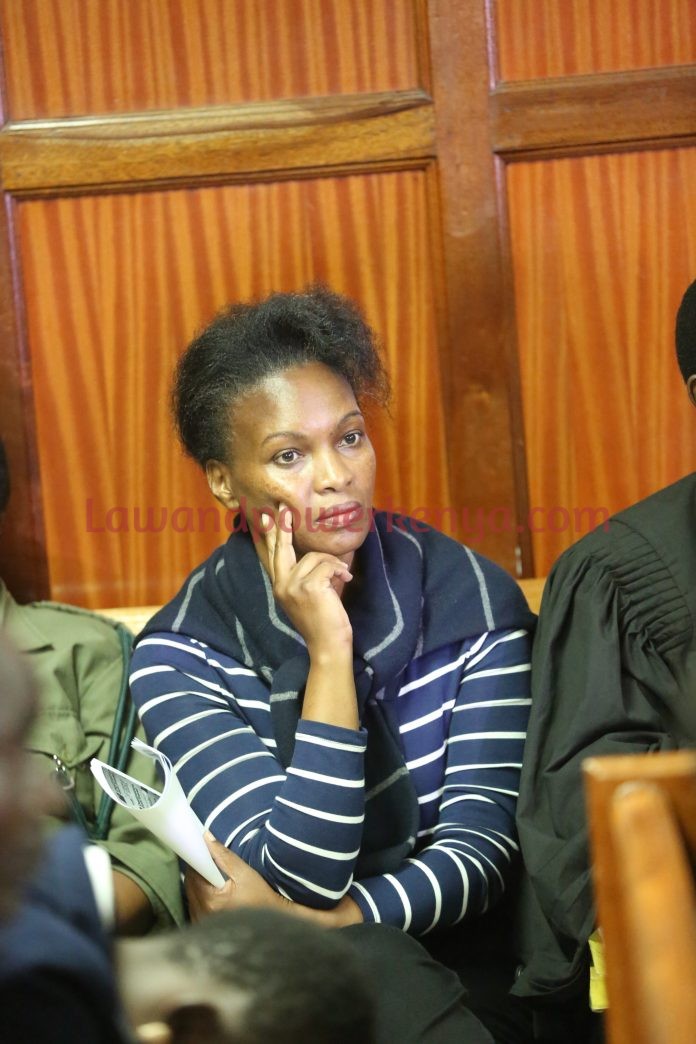 Sarah Wairimu, the wife and primary suspect in the murder of Dutch tycoon Tob Cohen will know her fate on bail on 11th October.

Justice Stella Mutuku directed that the accused be detained at Lang’ata Women’s prison pending the decision.

While opposing bail, the prosecution said Wairimu may abscond since the offence she is facing is serious and the sentence could be death penalty.

The court heard that the manner in which the businessman met his death or succumbed to the fatal, gruesome horrific injuries inflicted on him was one of premeditated with intention to kill him and the fact that Sarah Wairimu and her accomplices threw the body in the water tank in an attempt to cover up the incident clearly indicates a guilty mind.

“Therefore there is a high possibility and likelihood that if Sarah is released on bail or bond she will inflict fear on the potential witnesses having know what she did to Cohen”, added prosecution.

According to the prosecution, Wairimu has made several attempts through her agents to interference with witnesses.

The prosecution accused her lawyer, Philip Murgor of calling potential witnesses under instructions of Sarah and asking what they had said during their interviews with the police creating an atmosphere of intimidation against the witnesses, a fact that will form part of their testimony in the court, a clear indication of interferences.

It is alleged that Cohen’s family succumbed to the demands of Wairimu while in custody to have her attend his burial after she exercised undue pressure threatening to prolong the burial day or delay the burial of their loved one by opposing the issuing of a burial permit which would have resulted to the delay of the burial going against Jewish burial rites if they did not consent to her attendance at the burial.

It was further submitted that the accused and her lawyer Philip Murgor arrived at the burial and caused disturbance by uttering words and denying people entry to pay their last respects to Cohen which caused public outcry and stones were thrown at her defence team and the matter is going to be investigated.

On his part, Murgor told the court that his client is entitles to bail as enshrined in the constitution.

Murgor who had complained of being served with the application opposing his client’s release on bail told the court that he sees nothing more than mischief on the part of the prosecution.

He submitted that no shred of evidence has been adduced by the prosecution 38 days since his client was arrested.

“Nothing upon which the prosecution can claim there is strong evidence, witnesses to be interfered with, no postmortem report,” Murgor stated.

According to him, this is an indication that the court should grant bail without further a do.

The lawyer added that DCI boss George Kinoti has the keys to her matrimonial home through the investigator and therefore can not be interfered with.

He accused the DCI of taking the keys without proper handover and failing to respond on how the property will be secured.

“Instead Kinoti has been tweeting on his twitter page that ” murderers can not inherit” refering to Sarah…..,” said Murgor.

He said that Kinoti has lost his mind on the case and that the ulterior motive of this matter as at attempt to defraud his client ownership of her matrimonial home.

Cohen had lived in Kenya for more than 30 years holding various positions including that of CEO of Philips Group of Companies East Africa before retiring to become a successful businessman in Kenya until when he met his unfortunate gruesome death and found in a water tank at his home in along Farasi Lane in Mugomoni close, Nairobi.

According to investigating officer, post mortem examination conducted on the body of the deceased Cohen revealed significant injuries and broken bones on the body and the course of death was established to be due multiple injuries due blunt force trauma.