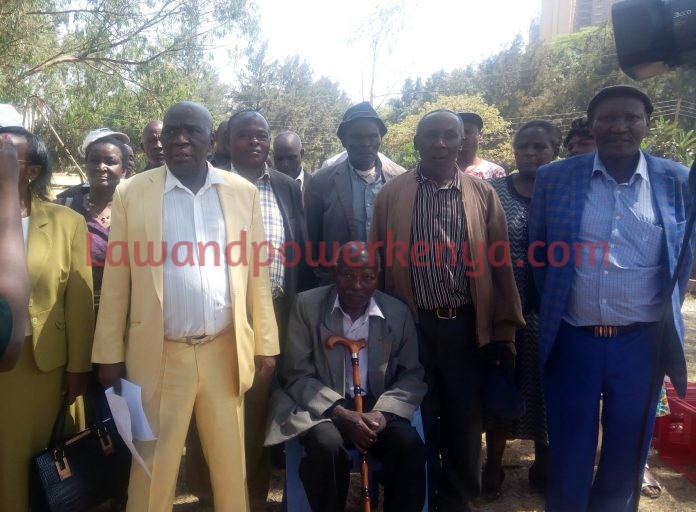 Gitamaiyu Trading Company Limited has threatened to sue some of the officials from the Ministry of land over forgery that saw them lose their Sh 3 billion land.

Through Philip Njuguna, a land consultant, the group states that the new constitution allowed them to revisit the National Land Commission and request for investigations over the real owner of the land.

There has been dispute over the land between Gitamaiyu and the purported owners of the 512 acres of land, Mugumo Nyakinyua Kiambaa Co. Limited.

Mugumo allegedly took over the land through the help of the late politician Njenga Karume and evicted Gitamaiyu.

Addressing the media in Nairobi, the group states that after investigations, NLC found that Mugumu acquired the land in an irregular manner.

Among those that might face the corridors of justice are the registrar of titles and the director of surveyors.

Gitamaiyu requested the commission to review the legality of the title held by Mugumo since there has never been an original title for the said land nor a transfer.

Mugumo is said to have acquired the land the land through Karume’s political influence in 1977 which saw the farmers evicted from the said land.

The group refuter claims published in the media that they had lost the land after a 25 year court battle.

They said that the group that appeared in court posing as Gitamaiyu were not their members.

According to the commission’s ruling, Gitamaiyu trading company was formed in 1973 with the objective of purchasing land and other property.

Its members were drawn from laborers on Franros Farm, whose owner of Fanros Limited.

In February 1977, laborers entered into an agreement with Fanros to purchase 512 acres for 4.2 million and assets contained in the said land. The transfer was also executed that same month.

The company alleged that it was during this period that powerful politicians and civil servants developed interest in the said land and sought to purchase it through Mugumo directors.

Further, Gitamaiyu alleged that fake indenture was prepared indicating the transfer of the parcels of land which were not executed by the owner but Mugumo directors.

The laborers produced evidence of payment, sale agreement and land control board forms executed by Fanros Limited, the original owners of the land.

With this, the commission found that Gitamaiyu was able to demonstrate that they entered into a sale agreement and paid for the land.

It was further ruled that the indenture was not credible since there can not be a single indenture for several plots.

“Despite the commission inviting the buyer as an interested parties, they failed to appear or send written representations,” reads the ruling.

The commission also found that Mugumo was reckless in failing to obey their order to stop processing of titles until the legality of their indenture is established.

“The directors processed titles for innocent buyers while this case was ongoing,” said NLC.

It was found that Mugumo acquired the disputed land in an irregular manner.

Finally, the commission ordered that all titles arising from the subdivision of the said land should be restricted an any further processing of titles ceased.