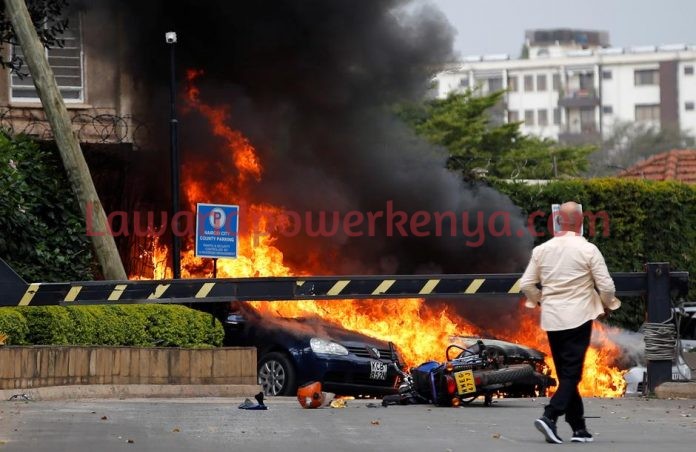 National Transport and Safety Authority licencing and registration department Director has moved to the High Court seeking to set aside orders detaining her for 30 days.

Jacqueline Githinji is being detained for 30 days in connection with the terrorist attack at the Dusit D2 Hotel complex that took place on 15 and 16th January.

In a certificate of urgency, she wants the orders set in the lower court miscellaneous application to be set aside or reviewed.

The Anti-Terrorism Police Unit (ATPU) obtained orders to detain the mother of three and four others pending completion of investigations.
Through lawyer Dunstan Omari, the applicant wants the court to release her on reasonable bond terms or any other condition the court deems fit pending investigations.
Githinji wants the High Court to call for the lower court file and consider the correctness and legality of the orders issued by Senior Resident Magistrate Muthoni Nzibe.
She accuses the court for erroneously proceeding to agree with the prosecutor and ordered her detention for 30 days despite a holding charge not being preferred against her. According to her, this makes the presumption of innocence meaninglessness.
“I remain innocent of the suspicions leveled against me. Moreover, being of good conduct and an elderly member of the society with a known abode in Kilimani, I invite this court to consider the duration of detention and review or revise the ruling of the Magistrate,” Githinji states.
She claims her continued detention is unconstitutional and violates her rights.

The mother of three claims that ATPU attempted to suggest that she may have aided or abetted the terrorist attack that befell the Dusit D2 hotel complex by issuing an alleged fake number plate that was used by the attackers.
According to the application, the allegation that she will run into hiding or interfere with witnesses is too outrageous and meant to serve curious purposes.
“Being a mother of three, absconding or failing to comply with the bond terms is impracticable and I will not interfere with witnesses,” Githinji states.