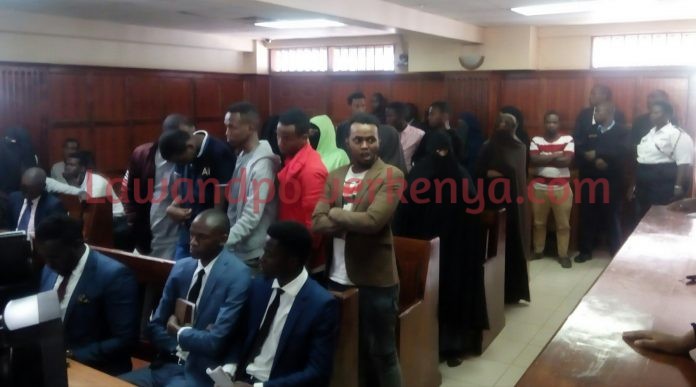 A Nairobi court has allowed the Anti-terrorism police unit to detain 43 terror suspects arrested in two colleges in Eastleigh, Nairobi for two days.

However, Senior Resident Magistrate Zainab Abdul granted the police two days after the lawyers for the respondents responded to the application to detain them.
“I have to give the officers ample time to complete investigations,” the magistrate ruled.

The suspects were arrested at Allison college and Atlas college, both located in Eastleigh on 21st January.

Among those arrested are two managers, several employees and students of the said institutions.

The managers are accused of operating the colleges without the requisite licences from the Technical and Vocational Education and Training Authority (TVETA).

They are suspected to be enrolling Somali refugees for English and Kiswahili languages after which the terror group recruits the students.

According to the investigating officer, Richard Ngatia, 15 of the respondents are suspected to be illegally present in Kenya and do not have any documents to ascertain their nationality.

Seven of them are said to posses passports with expired visas while over a dozen posses identification documents which need to be verified.

ATPU told the court they need time to investigate and verify whether the said managers have valid documents to run the institutions and interrogate all the respondents.

According to the investigator, they have intelligent reports that some of the respondents are communicating with members of Al-shabaab terror group in Somalia.

He submitted that they (respondents) have capacity to interfere with investigations and witnesses and therefore should remain detained until investigations are complete.

One of the lawyers on record, Abdulhakim Abdullahi objected the application saying that the officer failed to show any link between his clients and any terror groups.

“The issue in question is of documentation and verification does not require five days nor detention of the respondents,” Abdullahi told the court.

He added that some of his clients are true Kenyans and that nothing has been tabled to suggest they will interfere with investigations and witnesses.

Lawyer Shadrack Wambui who represented one suspect submitted that his client is a student at Atlas college and was arrested while in class yesterday.

“He was not informed why he was being arrested,” he told the court.

Wambui further added that his client suffers from epilepsy and urged the court with humility to dismiss the application before it.

The court heard that his father who is in court is ready to present him when required by the investigator to assist in investigations.

He further added that his client was denied right to pray by being warned severally.