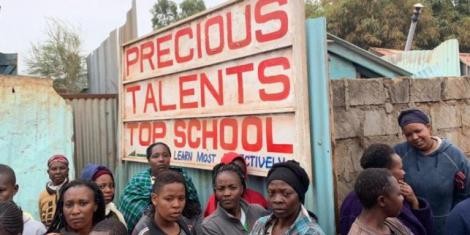 The owner of Precious Talents Academy in Dagoretti where a classroom block collapsed and killed eight pupils has been charged alongside eight Nairobi county government officials with manslaughter among other counts.

They are accused of killing Germine City Njeru on 23rd September 2019.

The Nairobi county public health officer Mwaura and Leparia are further charged with wilfully neglecting to ensure safety of pupils of Precious Talent Academy leading to the collapse of a building causing death of the eight students.

County Planning Compliance and enforcement officers Ndeke and Mwikali are charged with wilfully neglecting to ensure the school building was constructed to the required standard which led to its collapse causing the death of the students.

Quality assurance and standard officers Kahungo and Wangari are charged with wilfully neglecting to ensure quality and safety of the said school leading to the collapse of a building block causing death of the eight pupils.

Dagoretti sub-county education officer Isaboke is charged with wilfully neglecting to ensure the safety of the said pupils leading to the collapse of the building causing death of the eight students.

The denied all the sixteen charges against them before Kibera Law Courts Chief Magistrate Joyce Gandani and were released on cash bail.