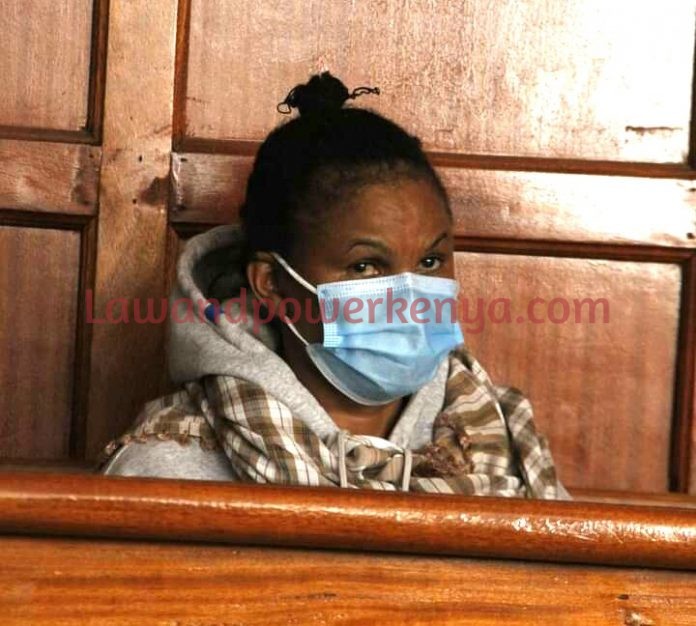 Court has ordered the woman suspected to have drugged Machakos senator Boniface Mutinda Kabaka to be detained for seven days to allow police to complete investigations.

Esther Nthenya Muli, a secondary school teacher, was in the company of the Senator in an apartment they had booked at Kilimani, Nairobi when he started vomiting and lost consciousness.

The Senator was rushed to hospital and is currently in ICU.

The prosecution told the court that the suspect is at flight risk and likely to interfere with witnesses in the matter.

However, her lawyer opposed the application saying that there was no holding charge against the suspect.

She added that her client is not at flight risk adding that she is a teacher and her home is in Wote town.

“She is a teacher by profession. She is still in employment at Mavemba secondary school,” the lawyer submitted

The court heard that the suspect is willing to cooperate and to avail herself if and when need by police to aid in the investigation of the matter.

The magistrate, in his ruling said it is difficult for the investigating officer to secure the scene of crime since it is a public place, therefore the suspect may interfere with the scene and witnesses.

On the issue of a holding charge, the court ruled that the offence she is likely to face has sufficiently been described as attempted murder.

“I find the applicant has complied with article 49 by informing the respondent of the charge that is likely to be preferred,” the magistrate ruled.

The court also noted that the matter is of public interest considering the victim is a senator and the suspect may therefore, abscond if released on bail.

According to the magistrate, the indication of where the suspect lives will not prevent her from absconding.

It is necessary to detain the suspect for a while to see if the health of the victim will improve since if things go bad and the senator who is in ICU dies, the suspect nay be charged with murder.

The court ruled that most children are at home due to covid-19 and therefore the teacher will not suffer prejudice if detained for seven days.

The incident took place on 3rd December at 3Dee apartments where the two had met and preliminary investigations revealed that the Senator arrived there looking “normal”.

Senator Kabaka was later joined by Muli and from the apartment, through telephone, they ordered drinks and food from the nearby 3Dee restaurant.

The court heard that evidence taken from the scene, including the food, drinks and vomit have been submitted to the government chemist for analysis.

The police also need time to record statements from critical witnesses including the senator himself without the respondent instilling fear in them or interfering with investigations.

The matter will be mentioned on 14th December for further orders.