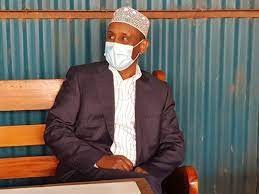 The anti-corruption has directed that the trial of Garissa County Governor Ali Korane will be heard in open court and hopes that requirements of the Ministry of Health will be met.

This comes after the court heard that the case could not proceed virtually as directed by the Acting Chief Justice Philomena Mwilu as a way of preventing the spread of Covid-19.

Anti-corruption court Chief Magistrate Douglas Ogoti decided to fix the trial for hearing on 17th May in open court. He noted that virtual cases need to be heard through the screens but currently there are no screens as prosecution indicated.

The prosecution said due to the voluminous documents being referred to, it would be better for the case to proceed physically.

Defense lawyer Issa Mansour urged the court to defer the hearing for this week since documentary evidence was crucial in the case and witness credibility is an issue.

He added that other accused persons are Garissa residents and will have issues with internet connection. He also said the defence will have a challenge with proceedings virtually with documents running to 3200.

“It would be better if documents were accessible to court by way of screen. There is need to have the documents in soft copy for the purpose of cross examination,” added Katwa.

They are accused of conspiring to commit an economic crime namely, mismanagement of public funds allocated to the county government of Garissa as a conditional grant for the Kenya Urban support Programme (KUSP) amounting to Sh 233,506,000.