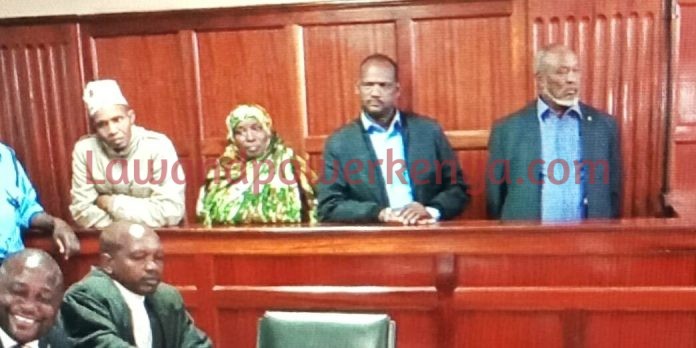 Four suspects accused of killing a Chief in Marsabit County have been produced before a Nairobi court after being rearrested.

Doyo Galgalo, Galmo Guyo Galgalo alias Makanyangu, Bokayo Did a Boru alias Wabaro and Somo Huka Kanchoro were brought to Nairobi from Meru law court where the matter was first registered but was terminated last week.

The four are accused of murdering Chief George Godana Darara on 16th December 2018 at Gargasa area in Quilta Karma location in Marsabit Central jointly with others not before court.

The accused appeared Justice James Wakiaga who sought to know why they had been produced in Nairobi and not Meru in regard with the jurisdiction.
According to the prosecution, there is a lot of ‘friction’ among communities in Marsabit and therefore Nairobi was the most prudent place to have the matter.
However, the defense informed the court that Doyo, Galmo and Bokayo were charged in Meru where they denied the charges and were released on a Sh 300,000 cash bail.
Further, they accused the DPP of being unhappy with the bail terms and were therefore in looking for a court where they would get stringent bond terms.
The fourth suspect Somo was allegedly arrested on 17th December 2019 and has been in custody since then.
He is yet to plead to the charges o grounds that he has not been taken for a mental assessment test.
The DPP was also accused by the defense of withholding the assessment report and failing to file it in court.
Justice Wakiaga directed the prosecution to file and serve their response on the issues raised by 4.30pm today.
The matter will be mentioned on Tuesday 29th for directions on plea taking and bond terms.